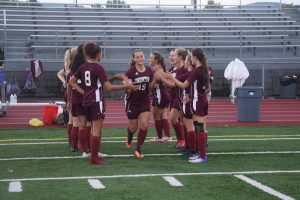 Uniontown High School girls soccer team has a record of 0-7. Some games were off to such a good start and then fell short by halftime. The game that they worked the hardest in and pushed themselves through, would have been Laurel Highlands. There are 21 players on the team and two seniors, Maggie Kovacs and Harlyrae Geary. Unfortunately there have been a few injuries throughout the season but that hasn’t stopped any of the players from going out and supporting their teammates. The team shows great team work and dedication. They all work together with making each other better and the team as a whole.

Maggie Kovacs is a senior and a starter on the team. She has really dedicated herself to soccer and just recently got hurt. Even though she is hurt, she’s still there on the sideline cheering for her team.  I asked junior Ashlyn Barcheck, “What is your favorite thing about soccer? She said her favorite thing is that “I’m able to forget about everything and just focus on the game.” I also asked her “What inspired you to start playing?” She said, “I’ve been playing since I was seven and my parents wanted me to be exposed to different sports and activities. I didn’t really start playing on my own until I was 11 when I joined a travel team and started getting a lot better at the sport.” Ashlyn said the hardest part about it is “The mental aspect of it. It’s a fast paced game and sometimes when you let a goal in, it’s hard to brush off the mistake and move forward.”

Written by: Kylie Ranaldi of the Tomahawk Talk