Cast your vote for the Student Athlete of the month for February.  This promotion is sponsored by Russ Blaho– Local Allstate Agent. 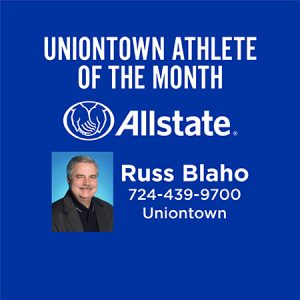 Dalton is a sophomore and has been a member of the swim team for two years as Captain.  He has been swimming since he was 11 years old.  As a leader he offers a lot of support to other swimmers on their technique and stroke training. He qualified for WPIALs in individual events and on relays both years.  He’s not only a member of the swim team but also the cross country, soccer and track teams.  Dalton puts 100% effort in everything he does not only in sports but in academics, maintaining highest honors.

Alex has been a member of the swim team for four years and captain for two.  Alex was the only male diver on the team for three years and qualified for WPIAL all three years.  Alex decided to not dive this year because of an injury and focused on swimming, which he qualified in two individual events this year. He is also a member of the cross country, soccer and track teams.  Alex is always willing to provide support to his team members.

Jahmere Richardson, Varsity Basketball
Jahmere was a leading scorer on a team that earned a 4th place seed in the WPIAL Tournament.  Not only is he a leader on the court but he has a 90+ average in all of his classes
Red Raiders Official Sponsor
Apr
08