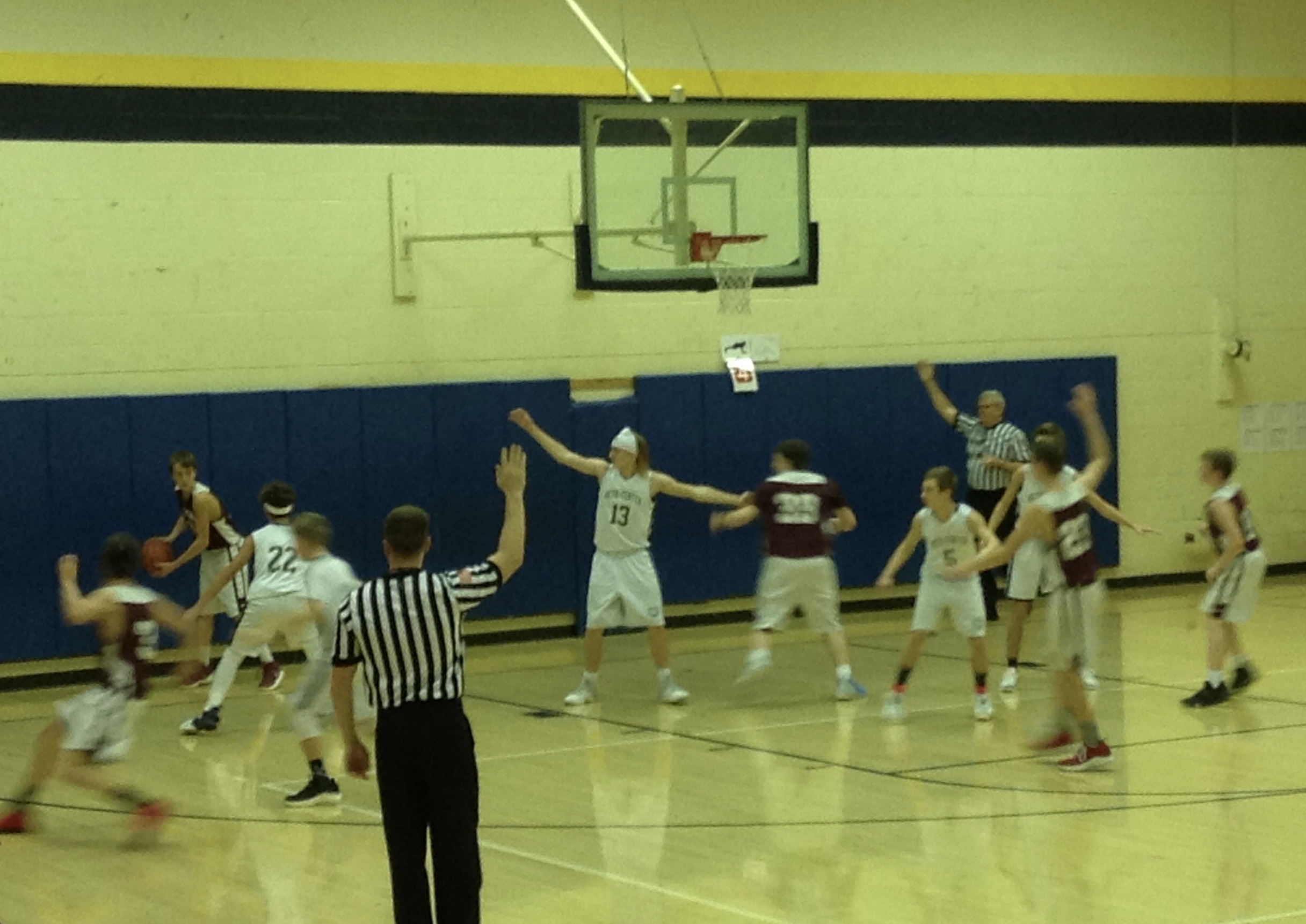 The A.J. McMullen Red Raiders needed every single point to defeat the Bethlehem-Center Bulldogs. Each team scored 17 points in the second half, allowing a one-point A.J. lead at halftime to prove the difference.
Tanner Uphold started the scoring for the Red Raiders and netted five points in the first quarter. Levi Garner registered two impressive blocks in the first period and finished the game with four blocks. Beginning the game in a 2-3 defense, the Red Raiders slowed the Bulldogs and managed a 7-2 lead before the end of the first quarter.
The scoring opened somewhat in the second quarter, with the Bulldogs briefly taking the lead. However, Tyler Hawk knocked down a three-pointer that assured a one-point halftime lead for A.J. This proved a significant moment of the game as the hot-handed Hawk would net two additional three-point shots in the third quarter.
With a slim 12-11 lead at halftime, A.J. McMullen looked to play a definitive third quarter and the Red Raiders did not disappoint in that crucial period.
With both teams pressing, the Red Raiders shutdown and shutout the Bulldogs in the third quarter. Tyler Hawk scored six points during the third period alone, while Levi Gilleland and Chase Murray also scored. The quarter ended with the Red Raiders leading 23-11, setting the stage for a wild fourth period.
The Bulldogs’ pressed significantly improved in the final period, forcing a handful of turnovers. Thankfully, Braxton Swaney, Tyler Hawk, and Tanner Uphold each managed two points in the final minutes of the game. However, Bethlehem-Center sank two three-pointers and three foul shots in the period, while tipping in a few additional baskets to cut the lead to 29-26.
With less than thirty seconds to play, A.J. McMullen needed to successfully inbound the ball against a feisty Bulldog full-court press. The crowd at Bethlehem-Center Middle School had also come to life, adding to the excitement and anxiety of the final seconds. A long pass was completed to Levi Gilleland, but the Red Raiders were unable to score. The subsequent possession for the Bulldogs was also fruitless and ended with the ball bouncing out of bounds.
The Red Raiders were again tasked with a difficult inbound pass. Only six seconds remained, but the Red Raiders’ pass sailed out of bounds without any player touching the ball. This provided Bethlehem-Center with the ball behind their own basket and the Bulldogs promptly took their final timeout.
A.J. McMullen played the ensuing pass to take away any opportunity for an easy three-point shot as time expired. The Bulldogs opted to inbound the ball inside, where Chase Murray was careful not to foul. Bethlehem-Center scored a final basket, but, as time expired, the A.J. McMullen Red Raiders clung to a 29-28 lead.
Tyler Hawk scored 11 points in the contest, his highest point total for a single game this season. Tanner Uphold scored seven points, while Levi Gilleland scored five points. Braxton Swaney scored four points and Chase Murray scored two points. Hawk, Uphold, and Swaney have scored in each game for the A.J. McMullen Red Raiders this season.
The A.J. McMullen 7th grade team also won 11-6. The 7th grade team has only lost once so far this season.
The Red Raiders travel to Coal Center to take on the California Trojans in their next game.