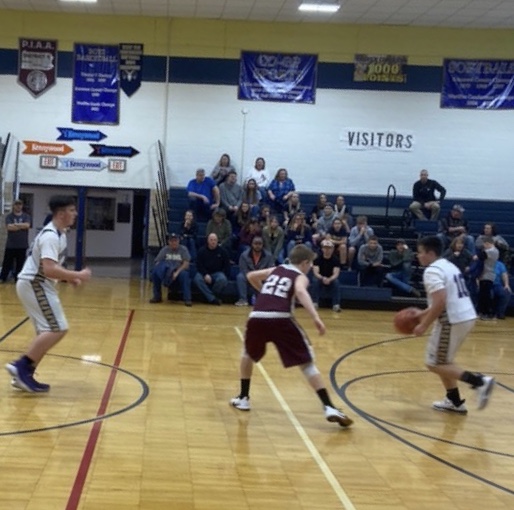 The long-awaited boys’ basketball contest between the A.J. McMullen Red Raiders and Turkeyfoot Valley Rams was realized on Friday, January 10, 2020. The teams had not met in nearly two decades, despite just 12 miles and the winding Mae West Road between the two schools.

Although the schools hadn’t played in the lifetimes of the players on the court Friday, there was a great deal of familiarity between the teams. The vast majority of players from both teams were veterans of either the Mountain Area Basketball League or the Turkeyfoot Valley Area Spring Basketball League – both of which are youth basketball programs serving the region. Many players from both teams had experience in both leagues.

Xavier Murray, Riley Livingood, and Grayden Plume scored readily in the first quarter of Friday’s contest at Turkeyfoot Valley. The Rams’ early scoring largely came from the hands of Craig Jarvis, who managed nine first-quarter points on his own.

The Red Raiders responded in the second quarter with a barrage of threes from Wade Brugger, Riley Livingood, and Trevor Uphold. Although the Red Raiders led the majority of the first half, some timely scoring from Jarvis and Myles Uphold put the Rams back in front at halftime, 22–19.

The Red Raiders cooled in the third quarter, with Murray producing most of the scoring and also delivering a huge block on what appeared to be an easy Turkeyfoot fast break. The Rams’ offense found help in the third period in the form of Chris Kozlowski, who took three separate trips to the charity stripe during that quarter.

Trailing 31–25 entering the final period, the Red Raiders did their best to rally. The visitors in maroon and white sank five of six attempts from the foul line, while Brugger and Plume each added jumpers in the waning minutes of the game. The Rams ultimately preserved a 42–34 victory.

No official score was kept for the 7th Grade game, but both teams played well. Xavier Sawvell led the A.J. Raiders in scoring in that abbreviated contest.