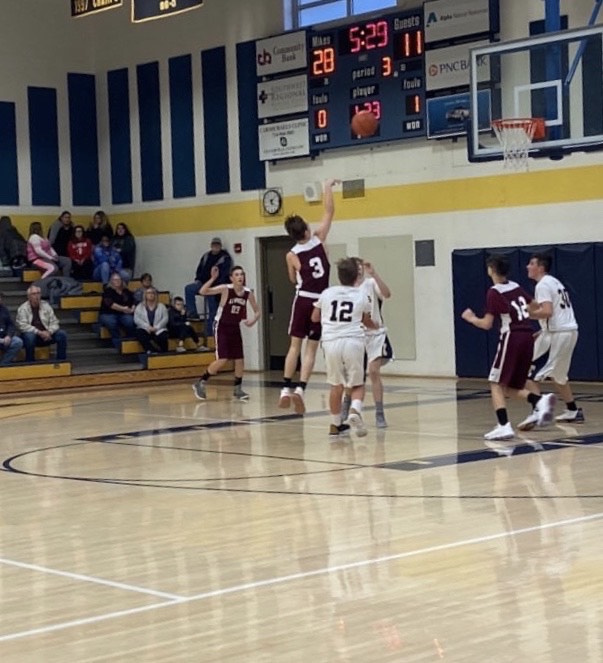 Remove the second quarter from Thursday’s matchup between the A.J. McMullen Red Raiders boys’ basketball team and the hosting Carmichaels Mighty Mikes and you’d have a 24-24 tie.

Unfortunately, the second quarter proved the difference in a 42-28 victory for the Mighty Mikes. The Mikes scored 18 of their total during that critical period, while the A.J. McMullen Red Raiders managed only four points during that same quarter.

The Red Raiders also failed to capitalize on four different visits to the foul line during the first quarter, sinking only three of eight shots. The Raiders finished the game with seven successful foul shots out of a total of 16.

The game did see the return of Grayden Plume for A.J. McMullen. Plume had missed the first three contests of the season with an injury. His presence was immediately known when he scored the first points of the game.

Levi Gilleland scored a season-high 13 points in the defeat, giving him 40 points so far this season. Xavier Murray added five points. Plume and Wade Brugger each scored four points. Livingood and Uphold each added one point. Gilleland, Murray, Brugger, and Livingood have managed to score at least one point in each game this season.

The Red Raiders will enjoy four of their next five contests at home, with the first of those coming on Tuesday against the California Trojans. The Raiders will also play host to the Frazier Commodores, Avella Eagles, and Bentworth Bearcats over the next few weeks.